Not every project has to be macho. And now that I have stated that, let me get into today's projects. 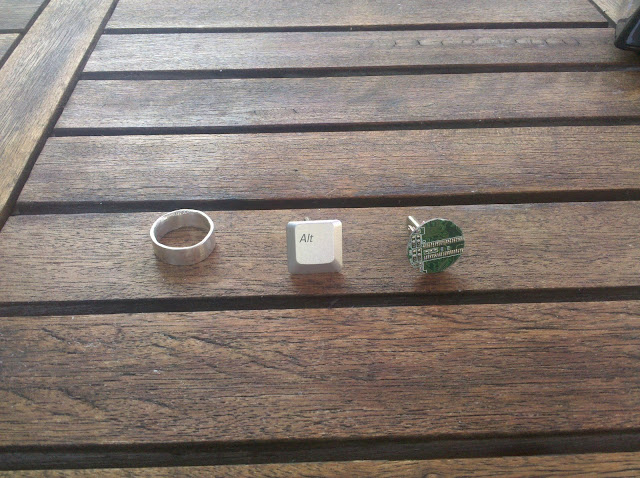 I first read this page years ago (long before instructables and I don't remember how I ended up there), and I was intrigued by the process.

Now, I cannot stand to wear jewelry. It is honestly a struggle to even wear clothes. Not because I am a nudist, or some other weirdo with an agenda, but because I have a hard time getting comfortable. Which is probably why I still stick to t-shirts, work shirts, Levi 550s (34-32), and chuck's size 9.5.

But, the thought of making a ring has stuck with me since. And no, it has nothing to do with any of that Tolkien shit. I may be a nerd, but I am sorry, those books were a serious task to get through. I won't go too far into it, but man, how many pages can you dedicate to a couple dwarfs hiking through a wasteland?

Anyway, Teener has a thing for silver jewelry, and I recently found myself at a flea market where an older chap was selling silver coins. It seemed like it was time to give it a try. I won't go too far into the process. The link up above goes into much better detail than I would. 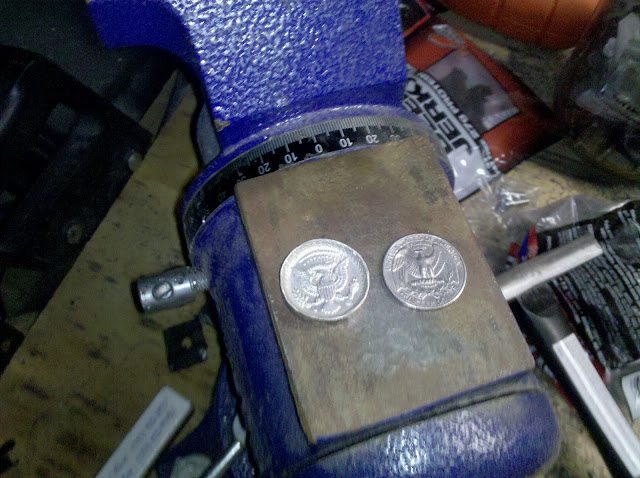 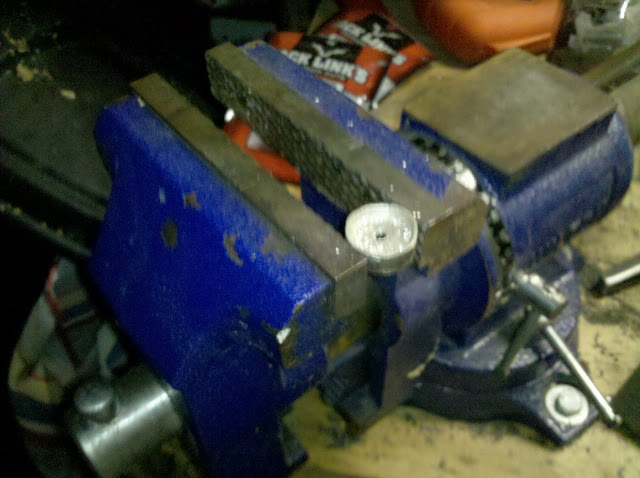 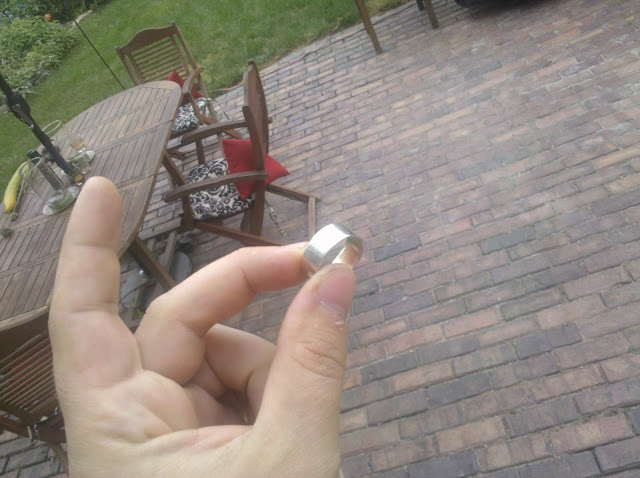 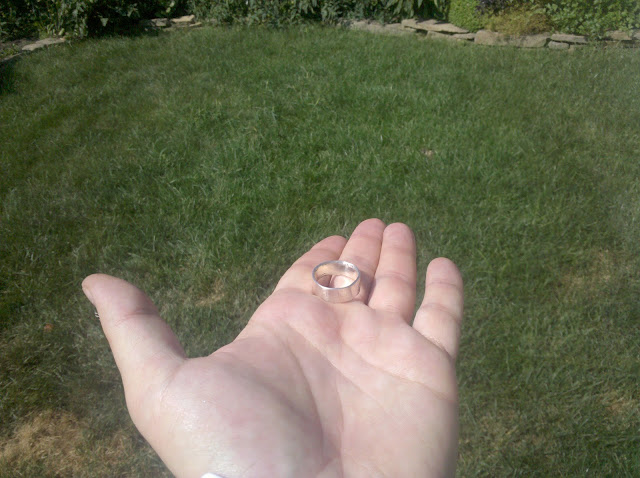 She says she likes it, and I have chosen to believe her.

The other project stems from jealousy over a buddy's recent birthday present.

My pal Ryan just got a pair of cuff links from his girlfriend. I know I made a bunch of ballyhoo above about clothes and comfortability, but I must admit, I do like wearing a suit. I think it might stem from the fact that I wear one about three times a year, so it is always a special occasion. And if I am going to wear a suit, I want to do it properly.

And speaking of a special occasion, my cousin is getting married in two weeks, so I decided to get a pair of French cuffs for myself.

I toyed with buying a pair of links off Etsy, but I decided to go the DIY route. I ordered some link backs from a seller off ebay, which set me back about $7 for six pairs. I could only think of two ideas for now. One pair is made out of some circles I cut out of some old ram chips, the other pair was made of a couple keys I popped of a defunct laptop keyboard (Alt and FN, silver, which is a bonus). I just glued them to the back with marine epoxy. I think I might dip the circuit board pair in a resin, to give them a nice finish. 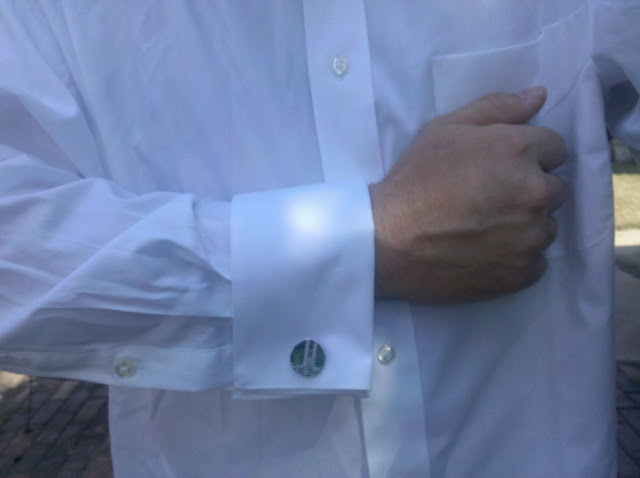 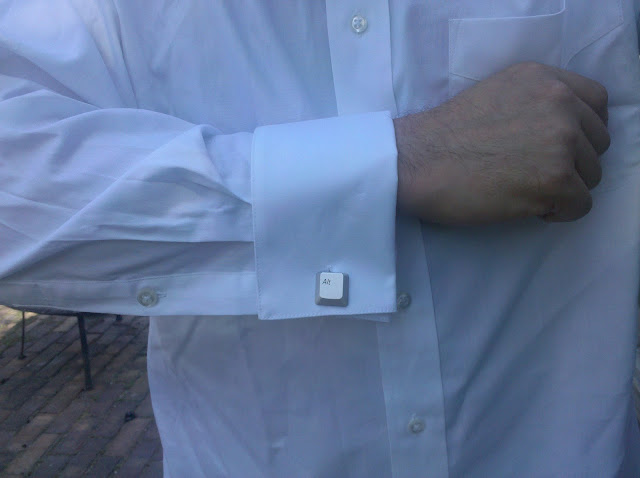 Speaking of which, I bought a nice tie while I was at the Detroit Maker Faire. It was from the Cyberoptix booth: 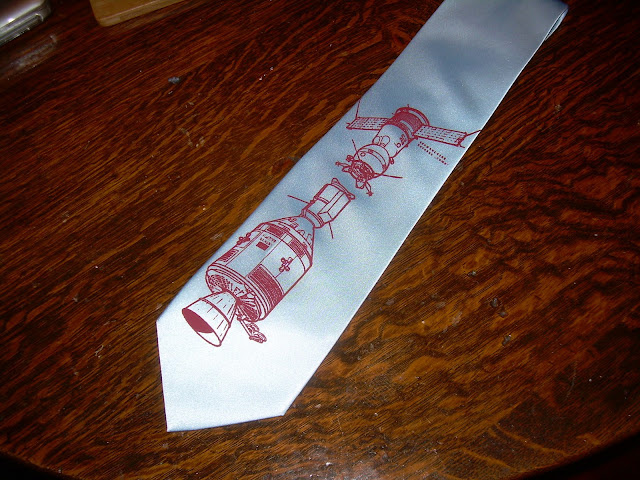 Their shit was really cool, and yes, it made me feel very old and sad when I realized that I went to a faire, and I bought a silk tie.
Posted by the dude at 2:07 AM