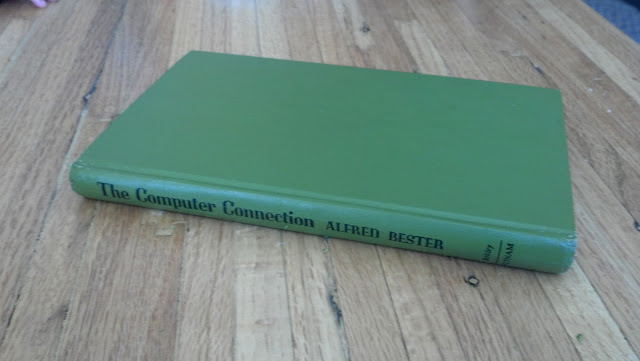 I recently purchased a Nexus 7, and I wanted a case for it. My sister has a really nice book bound bamboo case for her iPad, but those cost around $100. The Nexus only costs $200 new. I'm not going to buy a protective cast that costs half as much as the thing it protects.

I decided to dig around some old boxes of books to see if I could find one that would make a good case. This one was the perfect size. It looks like I paid $1 for it at a used book store (probably John King). I had a little anxiety about destroying a book, but a quick Amazon search showed plenty of used copies available for around $3, so this is in no way rare. Guilt assuaged, I went to work.

I didn't take any picture of the construction, which was unremarkable. There are plenty of tutorials online about making hollow books, so Google that if you are curious. The only thing I did differently was I used wood glue instead of Elmer's, which worked really well. I then lined the pocket with felt, to keep the tablet snug and safe. 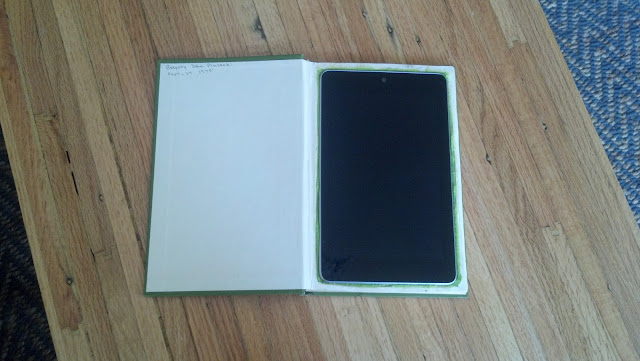 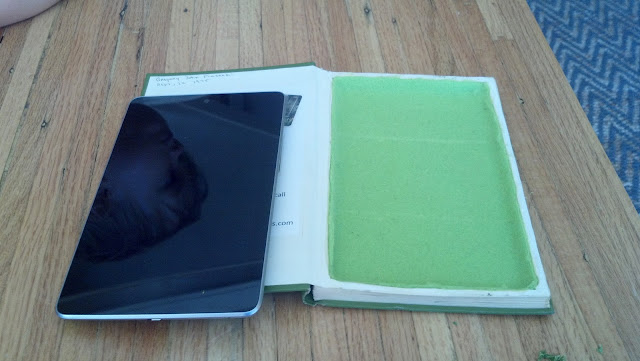 I feel like this does a good job of camouflaging the tablet, while also protecting it. This cost me practically nothing, and took about 45 minutes to make.

I also glued an insert to the front cover that basically says "I belong to a nice guy. That guy has a baby. You wouldn't want to steal something from a nice guy that has a baby, would you?". It then has a couple pics of my daughter and contact info in case someone finds it. 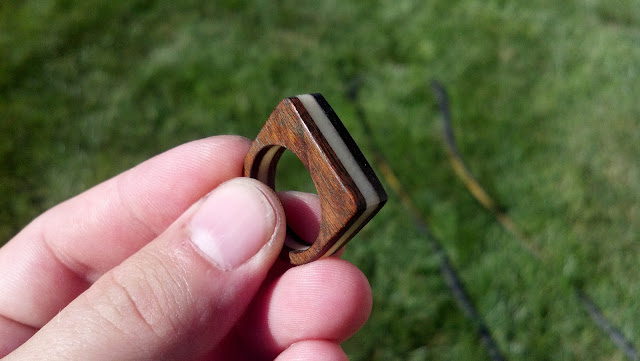 I saw a picture of a wooden ring somewhere, and I decided to make one. I had some scraps of  brazilian mahogany laying around, so I used that. The first attempt was made out of a single piece, and was too brittle. This was the second attempt. I sandwiched two pieces around a slab of bone I cut out of a dog chew.

I kind of winged the shaping of it on the fly, and this is what I came up with. Brazilian mahogany is a really dense wood, and it polished up quite nicely on a buffing wheel.

Teener was very happy with it when I gave it to her later that night.
Posted by the dude at 10:37 AM No comments: